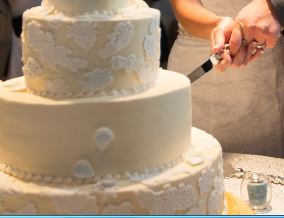 Why Do We Do That?

“Something old, something new, something borrowed, something blue,” we’ve all heard that rhyme at some point in time. Wedding celebrations have been around for centuries, with every culture doing things just a bit differently. However, most traditions have the goal of blessings couples with good luck, happiness, fertility, and prosperity. Here are a few examples of some of the modern day traditions and how they got their start way back when…

Back in the day, it wasn’t just a manner of picking your closest friends to party with and plan the wedding. No, this carefully selected bunch had to be on hand to possibly defend you if kidnappers, scorned exe’s, or disapproving parents tried to ruin the nuptials. The “Best” in Best Man meant that that guy knew his way around a sword and would fight for you and your bride, should the need arise. This is also why the groom and groomsmen stand on the right at the altar, this position kept their right hand, aka sword holding hand, free in case they had to fight at a moment’s notice. The ladies were also involved in security during the ceremony. Rather than wearing 80’s throwback dresses with layers of tulle and puffy sleeves, the girls started off wearing clothes similar to the brides’ ensemble in an effort to “trick” any of the exes, thugs, and evil spirits lurking about so they wouldn’t know which girl was the bride. Would you believe that after the bride spent hours doing her hair, freshening up for the day, and dressing in her very best, the first thing her new hubby did after dinner was break a loaf of bread over her head and sprinkle crumbs in her hair?! Why on Earth was that acceptable? Well, according to tradition, the groom breaking bread over his new wife’s head was a symbol of his dominance over her. The crumbs that inevitably fell to the ground were considered good luck and guests pounced on those like a cat on a mouse. Another spin on this tradition was wheat, a symbol of fertility, being thrown at the bride and groom in order to ensure they make lots of babies and keep the family line going. Finally, respected Roman bakers decided to take the wheat and make a delicious sweet cake and share it amongst the guests. Much less mess this way…and the bride’s ‘do was safe from crumbs. Giving the Bride Away

As proven over and over again in lots of old traditions, women didn’t have a whole lot of say in what happened in their lives. Fathers traditionally decided who their baby girl would marry and it was usually to the highest bidder, the one that would benefit dad’s business the most. Whether a father used his daughter to buy peace with an opposing family, settle an old debt, or climb the social ladder, girls had very little say in who they’d spend the rest of their life with. This also led to how the tradition of the veil came into existence. A lot of times with these arranged marriages, the bride and groom didn’t meet until they were standing at the altar ready to say their vows. The bride wore a veil to cover her face so the groom couldn’t back out if she wasn’t as pretty as he was hoping. The Victorians came up with this rhyme to make sure the bride had her whole outfit together before walking down the aisle and also, following this old adage was a guarantee for good luck. Something old was a tie to her single life with her family. Usually that would mean wearing a piece of jewelry that was a family heirloom or even wearing mom’s wedding dress. Something new was the link to her new husband and family and in most cases that meant buying a brand new dress. A woman in a successful marriage traditionally supplied the something borrowed as a symbol of good luck and also to remind the bride she will always have the support of her family and friends. This item could be a handkerchief or a piece of jewelry. Blue was known to be a color denoting purity and loyalty and showed up as the garter. Lastly, a sixpence in the bride’s shoe was a hope for wealth and prosperity in the marriage. Author W. Somerset Maugham said, “Tradition is a guide and not a jailer.” When planning your wedding, don’t feel like you have to use every single tradition for the sake of it being a tradition. Choose the ones that work best for you and your new spouse. Take the opportunity to make up your own new family traditions that you and your guests will remember for years to come.

Giving the Bride Away Photo Courtesy of Hopkins Studio

One comments on “Why Do We Do That?”