Miranda and Jenna met while working together at Applebee’s, and it was love at first sight. After moving around to four different states, they finally settled down in Fort Worth, Texas. Seeing that their relationship could survive so many changes, Jenna knew that Miranda was the one for her. On a random Wednesday, Jenna setup a perfect proposal. She had music playing and post-it notes of all the reasons why she loves Miranda. Meanwhile, Miranda had no idea this was happening, she just thought it was a normal day, until she got home from work and saw everything. Needless to say, Miranda said yes when Jenna asked her to be her wife, and the planning process began. read more With Thanksgiving, Christmas, and New Year’s right around the corner, many couples may be thinking about booking a holiday wedding in the next year or so. Is this really a good idea though? Before booking, consider both sides of the coin before putting any deposits down

Holiday time means longer weekends and longer weekends means time to party! This should allow more folks to be able to be included in the rehearsal dinner or morning after brunch festivities. And it’s a good excuse to get all the extended family together around the holiday season. read more Bridget saw him and decided to say hi to see if Mike would remember who she was and, of course, Mike couldn’t forget her. It was almost too perfect that after some chatting Mike had mentioned that his department was hiring, and it just so happened that Bridget was looking for a new place to continue with her career. Well, soon enough, the former class acquaintances began to date, fall in love, and would start their lives together. Mike had actually always known that they would end up together, and later told Bridget that this is exactly why he was nervous to ask her out; he knew that they would never break-up.  He was right! They’ve been together ever since, living in LA for a few years, working on some feature films and rescuing an adorable dog, Walter. read more Limos, trolleys, and party busses oh my! These days there are more options than just a stretch limo for transporting the bridal party from point A to point B. Now it’s a growing trend to provide transportation not just for the bridal party for pictures, but for the guests as well. This blog will talk about the pros and cons of providing transportation and some tips to keep in mind when booking your wheels for your big day.

Cons (but really more like just things to think about while coordinating transportation): read more 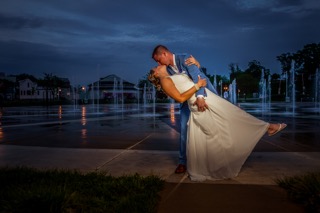 Kyle Decker and Erica (Weidner) Decker wed Sunday May 24, 2015 at Dunes Pavilion on Silver Beach with reception at Shadowland Ballroom. Their story all started on a wintery December night in Angola, IN; where they happened to meet when they were out with mutual friends listening to live music. After talking and dancing a bit, they decided to stay in touch. As multiple days passed, talking, texting, and chatting on Facebook were frequent, but it was a little over a month before they were able to have our first date. The rest as they say is history. read more 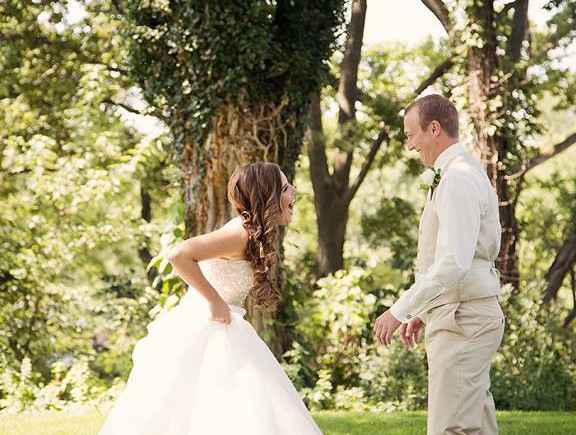 A growing trend in the industry is the couple having a “First Look” before walking down the aisle. For you traditionalists out there, you may be panicking at the thought of bringing bad luck to the already stressful day and be looking for the nearest salt shaker to throw over your left shoulder, so this route may not be for you. But for those wanting to be a little trendier, or may just be in a time crunch and need to move things along quicker, a first look may be for you. Why all the buzz about bad luck? read more A lot of our couples have questions about the use of candles in the ballroom. Follow these simple do’s and don’ts when mapping out your décor for the big day:

It looks absolutely beautiful in the ballroom to dim the lights and rely on candle light to light the room later in the evening.

Having wax drip on linens, the floor, and walls is a big no-no. While we love candles, we love them being contained in some sort of vessel more.

Put them in the windows in the sunset room read more

There are few things that put a smile on my face faster than books. I can’t get enough of books and anything that has to do with them. Because of me Barnes and Noble will always be in business. When it comes to weddings, sometimes a traditional book is the way to go. Sometimes couples are looking for other ways to personalize the day  There are so many creative and personal touches that can come into play with the guest book area. Here are some of our favorite ideas that have come into Shadowland: read more

Posted on September 2, 2015 by Shadowland Liz and Ken got married at Shadowland on Friday, June 19, 2015. The happy couple have quite the history together, meeting when they were in 8th grade, sharing milestones like driver’s ed, and then after losing touch for awhile, rekindled their friendship that grew to love as adults. These two are quite the lovebirds and couldn’t have had a more beautiful day. Liz and Ken opted to have both their ceremony and reception at Shadowland. Something that was unique about this set up was the addition of the family Chuppah, a special canopy used in traditional Jewish ceremonies. One of the most treasured family heirlooms covered the Chuppah- a quilt with pictures of every couple that had been married under the Chuppah, and now Ken and Liz get to add themselves to the family history. Another tradition that made its way to the ceremony was when Ken and Liz signed the Ketubah. Only family and a few close friends were witnesses to this. The Ketubah is a piece of art with special writing in Hebrew and English, akin to a marriage contract. A very important detail in the ceremony itself was expressing the couples’ views on marriage equality. Liz’ Dad wrote a heartfelt poem about this matter and a friend of the bride, Rachel, recited it. Another fun thing that Liz and Ken decided to do was rent out The Discovery Zone Children’s Museum and brought in their own babysitters to corral the youngsters into a kid-friendly area while the parents could enjoy the ceremony. read more 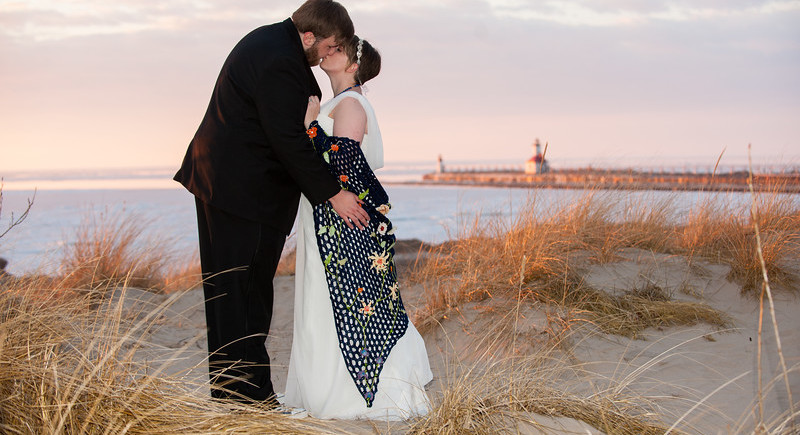 Maya and Paul was Shadowland’s first couple wedding of the 2015 season. These lovebirds actually met at a wedding and after a little prodding from Maya, the two danced the night away and led to them having a series of wonderfully awkward moments that brought them to their wedding day. Even though neither one of them grew up in the St. Joseph area and had different visions of what they wanted their wedding to look like (he wanted a converted bank venue with marble and pillars and she envisioned a casual barn feel), Paul found Shadowland online and after a visit, the rest is history. read more